A Taste Of Trio Koko

Dutch roots band on a mission: ‘to let your joint groove with style’! Roots ‘n bluesy stuff on bass, drums and a guitar with and without vocals. That, in a nutshell is what the Dutch band Trio Koko is about. The  members of the band -Ton van der Kolk, Timothy van der Holst and Ron Smith – are smokin’ – white hot – tuned into the same primal source … the blues.

But the blues – result of an intermingling of work songs, field hollers, European ballads and popular songs of the day  – the blues,  mother of all 20th century rock & roll music, is more than ‘just the bluaes’, at least according to Koko. The musical spectrum they are covering is wider. Their conception/idea of blues is inspired by the richness of other roots music like rhythm and blues, rockabilly, surf, and country & western. Notice the way Koko likes to juice these styles with a party sensibility by using latin-oriented rhythms like mambo.

Check out the Koko demo-CD “Koko goes blues”, on which you’ll find songs like that. Or listen to their first CD  “This is Koko”, full of instrumental surf-cocktail tunes.

Many of their tunes are made for some top-down cruisin’ or butt-struttin’ funky chicken dance action that’s spearheaded by Smith’s motoring guitar leads, van der Kolk’s groovy basslines and van der Holst’s  shuffling drumrolls. Koko stomps on everyone’s ass when they do their thing. They boogie, they rock, they shuffle and surf shit down to it’s core. Koko is good-time, hip shakin’ fingersnappin’ fingerlickin’, kikkerlickin’ rock & roll that leaps at you from one high energy note to the next. Check it out when they play in your home town and buy that record! 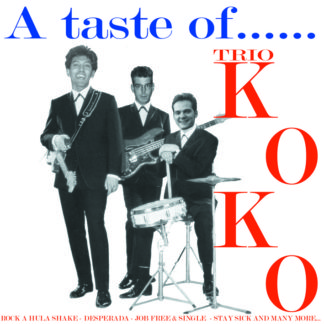