AIFF are in long terms Afro Influenced Funk Federation. The Dutch musicians around DJ and producer Phil Martin and musician Ton van der Kolk play an enormous groove establishing their own version of afro-funk. Influenced by classic afro funk like Fela Kuti, they try to bring afro-funk to a new dimension. Like other actual afro funk projects, they integrate all their musical influences in their tracks. The favourite styles they melt to their unique sound range from deep-funk, soul and jazz to reggae and afro music. They just love all kinds of roots music.

AIFF give proof to the fact that young musicians can make music in an afrobeat way. The percussions are breathing in a wide space, the guitar simply forces you to dance and the horns change from mellow to rude style. You can feel the “endless groove“ rising, which is when a base rhythm of drums, muted guitar and bass are repeated like the groove will never end. AIFF played most instruments on their own, for the vocals and horns they just asked friends they like to work with like Marco Hijl on saxophone and flute.

Their limited first 7“ AKWAABA/Watergirls (UNIQ120-1) was highly recommended by Paul Murphy from Afroart recordings and Andy Smith from Portishead. International DJs Keb Darge and Snowboy played it at their gigs, even icons like Paul Weller love that tune. The positive response to this single made AIFF decide to come up with a full album.

AIFF are no newcomers. They play and produce music in several projects. Phil Martin plays drums in his band “The Jazzinvaders” and is producing with the Dutch legendary jazz group “The Houdinis“. He runs his own label ”Social Beats“ with releases of Tim Wood, Solo Moderna and his own projects ”The Jazz Invaders“ and  “The Soul Snatchers“. „The Soul Snatchers “ are a soul 45 band which was the basis of AIFF, their impressing tune “Sniffin and Snatchin“ can be found on “The New Testament Of Funk 5“ – Compilation (Unique Records 121-1). Their tracks take the old soul and funk atmosphere to a high modern level and nevertheless develop their very own style. They just show that soul is still alive these days.

Ton and Phil have known each other for a very long time. They have been friends since they were teenagers. Their love for old funk, jazz, soul, hip-hop, reggae and other grooves lead to the result of  “Afro Soul System“. On the album, they use all the right elements from the old afro beat history and develop a unique new but „old“ sound: afro beat drums and percussions combined with these melodic funky guitar parts, the recognizable fender rhodes and organ parts and heavy, mean and rough horn sections. And all together, the result is the endless groove through a repetitive element in trippy grooves.

But let’s not forget about the excellent guests appearing on the mic: First of all, there is Crucial T. on Afro Riddim. He was singer of the ska group “The Continentals“. He joined Ton and Phil for their project “The Soul Snatchers“ together with the horn section of his former band. In the following, they joined in for AIFF as well. Crucial T. had a long career as frontman before and therefore knows how to please a crowd. Besides, he is a great vocalist and toaster.

The fourth track Life features Linda Bloemhard on the mic. She is mainly the vocalist for the nu-jazz group “The Jazzinvaders“  but worked for a great jazz band called “Mo“ as well. Her great voice has also been part of tracks by “Kraak & Smaak“ and “Mendoza Dance Parti“. AIFF loved the cooperation with Linda and hope to work with her again in the future.

Last but not least, there is a well-known guy for all insiders of Unique Records, Travis Blaque. With his album “The Many Facets Of Travis Blaque“, he gave an enormous impression of a rapper with “real“ messages. His conscious style has a great flow and makes you believe in the power and qualities of hiphop movement again. Ugly Duckling shows him in his special way to transport his messages while the horn section plays a great instrumental refrain. The result is a real hit tune with intelligent lyrics.

AIFF are in a par with other actual projects who like to sound old and every now, like Quantic, New Mastersounds and Speedometer. The old funk and soul stuff from the sixties and seventies are great influences as there is, of course, the legend of afro funk, Fela Kuti. In actual music, they love the Daktaris (Desco Records) and the Budos Band for their afro-funk with that old sound.

AIFF really have a mission, they want to show you their passion for the music they love in their own demanding way. Let them take you to a powerful trip into their own world of afro funk! 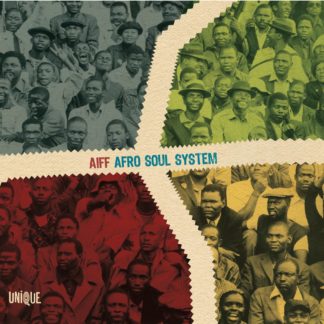