A best of album by The famous dutch bop group The Houdini’s newly recorded and produced by Phil Martin. To make this project even bigger phil asked a couple of his favorite producers to give their interpretation of the tracks. What a big surprise! It shows that the material of the Houdini’s is funky, danceable and irresistible too.

It was in the beginning of the 90’s that I started to get interested in jazz music. I began listening to all this Blue Note classics by Art Blakey, Hank Mobley and Donald Byrd.

I was also looking for live music in different jazz clubs but almost every concert was a disappointment. The Dutch jazz musicians weren’t into the hard bop sound I liked. I gave it one more try with this new group called The Houdini’s. I read their story and they had just recorded an album with the famous Blue Note producer Rudy Van Gelder. The man with the sound I loved so much. Well, they blew my mind! What power, what energy! The Houdini’s showed me that jazz was all about fun. This was the live sound I had been looking for. These guys were like a rock ‘n roll band playing jazz. I have been a fan ever since and they have kept growing and developing their music, releasing other great albums. In 2001 I started doing some gigs with them and I formed The Jazzinvaders with two of the members. In 2007 we got together to work on a project together. You’re now looking at the result. An album on which we wanted to go back to the Houdini’s roots. I think we succeeded in getting that powerful energy of their great live sound on tape. To make this project even bigger I asked a couple of my favourite producers to give their interpretation of the tracks. What a big surprise! It shows that the material of the Houdini’s is funky, danceable and irresistible. 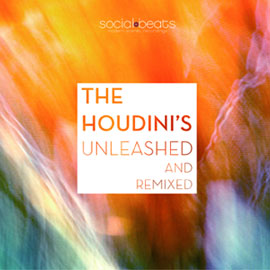