Disco of Decay is the debut album by the Black Tie Electrons is an exciting new electro-pop band from The Netherlands. Drummer and producer Phil Martin (Jazzinvaders, Laura Vane and the Vipertones, Jaffa) teamed up with singer and guitarist Otto van Gemert (Fervid) to write an album brimful of electrifying songs. Vocal harmonies, distorted synths and spiky beats are combined with analogue percussion, bass and guitar sounds to make songs that sound organic, clear and sometimes edgy.

Black Tie Electrons love alternative dance, funk, new wave and 60’s beat music and mix these all up with their own musical idiosyncrasies. The result is their debut album ‘Disco of Decay’ . Full of hypnotizing melodies and beats, this album is a fresh and inspired trip into electro-pop heaven. The songs have fragmented lyrics that take you from the most personal atomns of thought to the dancefloor and back again. The title track, and first single taken from the album, combines baroque disco music with introspective, postmodernist lyrics. 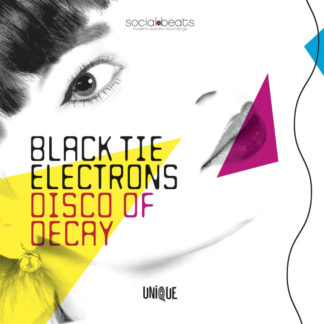